Please join us in congratulating Where No Wall Remains artist and co-curator, Tania El Khoury on being awarded the 2019 New York Dance and Performance Bessie Award for “Outstanding Production,” for her piece, As Far As My Fingertips Take Me!

As Far As My Fingertips Take Me, is currently touring in California and Munich, and has been performed across the US, Middle East, and Europe this past year. In April 2019, I was fortunate to experience the “encounter” (as described by Tania) myself, at the Freehand Hotel in New York through its Fellowship Program created with Bard College. Performed in a small room down the hall from the hotel bar, the atmosphere was intimate, but not isolating. The now recognizable wall, with the lyrics of the song sung to you throughout the performance and an arm sized hole, took up most of the space. The window looking down onto Lexington Avenue prevented claustrophobia, but the silence kept me grounded in the space. I was in the room alone, but not quite.

Once adorned with the lab coat provided, I sat in front of the wall and equipped myself with the headphones hanging nearby. “Hello, my name is Baz.” Baz, Basel Zaraa, is actually on the other side of the wall, and he is your storyteller and guide for the next few minutes. Baz’s vulnerability, however, must be returned (but not matched); he asks that you place your arm in the hole in the wall, next to your seat. And so you begin. Baz tells you the story of his journey born a Palestinian refugee in Damascus, as he speaks (not live, but through a recording) you can feel, but not see, that your arm is being moved around. It becomes clear after a few moments that he is drawing on your arm, but his drawing is only revealed at the end.

As the story of Basel and his family’s journey from Damascus to Sweden unfolds, the rap song written on the wall in English, is sung intermittently in Arabic. All of this is mixed with the sounds of waves crashing, the waves that many people have traversed to escape war, only to enter more strife. The lyrics are as candid as his story.

(Basel Zaraa. From As Far As My Fingertips Take Me)

Once Basel’s drawing and song are finished, you can see what he has been working on on the other side. 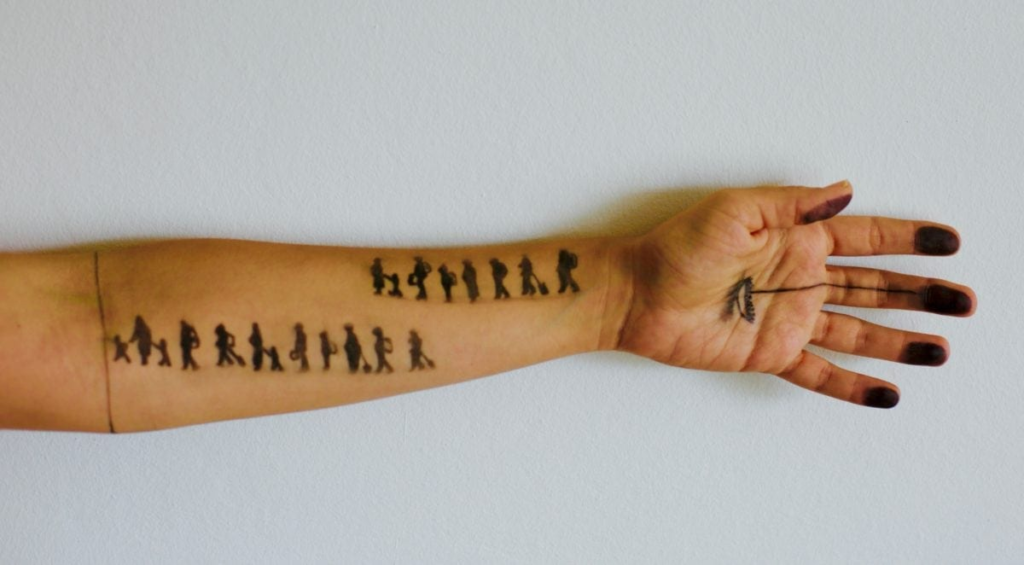 You have two options: Wash off the figures with water or go on with the rest of your day, bearing the migrant’s story for all to see.

Basel emerged from behind the wall and greeted me. I took a moment, to both admire his work, and connect his face (which I hadn’t seen up until then) to his story and my arm. “Shukran.” I thanked him in his native Arabic. He blinked and smirked at me, he bowed and returned my “shukran.”  He motioned towards the bowl of water and paper towels provided. “I think I’ll keep it.”

As Far As My Fingertips Takes Me engages all of your senses and conjured feelings I didn’t think I’d feel on the corner of Lexington and E 24th. It gives you the option to leave those sensations and feelings in that room. Or take that story, and all the other stories of migration, and show the rest of the world. Nobody, asked me about the figures on my arm as I rode the train through Manhattan and Queens. Maybe a few people turned their heads to get a closer look. Either way, the image was out in the world, giving opportunity for the story to be shared; although the ink indeed only went as far as my fingertips, its story extends much further.