Hostile Terrain 94 at the Fisher Center at Bard

Hostile Terrain 94 at the Fisher Center at Bard

Hostile Terrain 94 has arrived at the Fisher Center! Although Jason de León, the head curator of the project, is unable to join us, his team has been hard at work facilitating the project’s installation here in Weis Atrium. Gabe Canter, one of HT94’s four Exhibition Coordinators, has been part of the project since its inception. A former student of Jason’s at the University of Michigan in Ann Arbor, Gabe met Jason by happenstance after his Anthropology 101 class switched professors. Gabe began to work with Jason on the Undocumented Migrant Project (UMP) in the winter of 2017. Gabe conducted a photo-ethnographic study on protests starting in Ann Arbor and soon after traveled to NY and Mexico as the presidency of Donald Trump began. Gabe didn’t picture himself working so intimately with the US-Mexico border and migration, but Jason’s offer to come work on HT94 in Los Angeles was hard to pass up.

Hostile Terrain 94 is still a prototype, and has few more stops around the U.S. and Canada through the end of 2019. The first stop for HT94 was in Lancaster, PA. Gabe and just four other exhibition participants filled all of the more than 3,000 toe tags over the course of two and a half months. Gabe described it as a very “emotional experience” and that the group of 5 relied on each other for support as they recognized the thousands of deaths together. After Lancaster, the team had a better sense of the logistical necessities of the installation. HT94 then had a pop-up run in Michigan where 600 participants were able to complete the installation in two and a half days. “It was great that we now knew it could be done so quickly, but the downfall was that there was no time to process.” Rather than being able to take their time, students in Michigan were given 30 minute slots to complete as many tags as they could until the next group came to relieve them. Here at the Fisher Center around 40-50 participants showed up on Wednesday to participate, and more have been continually adding to the wall throughout the week. 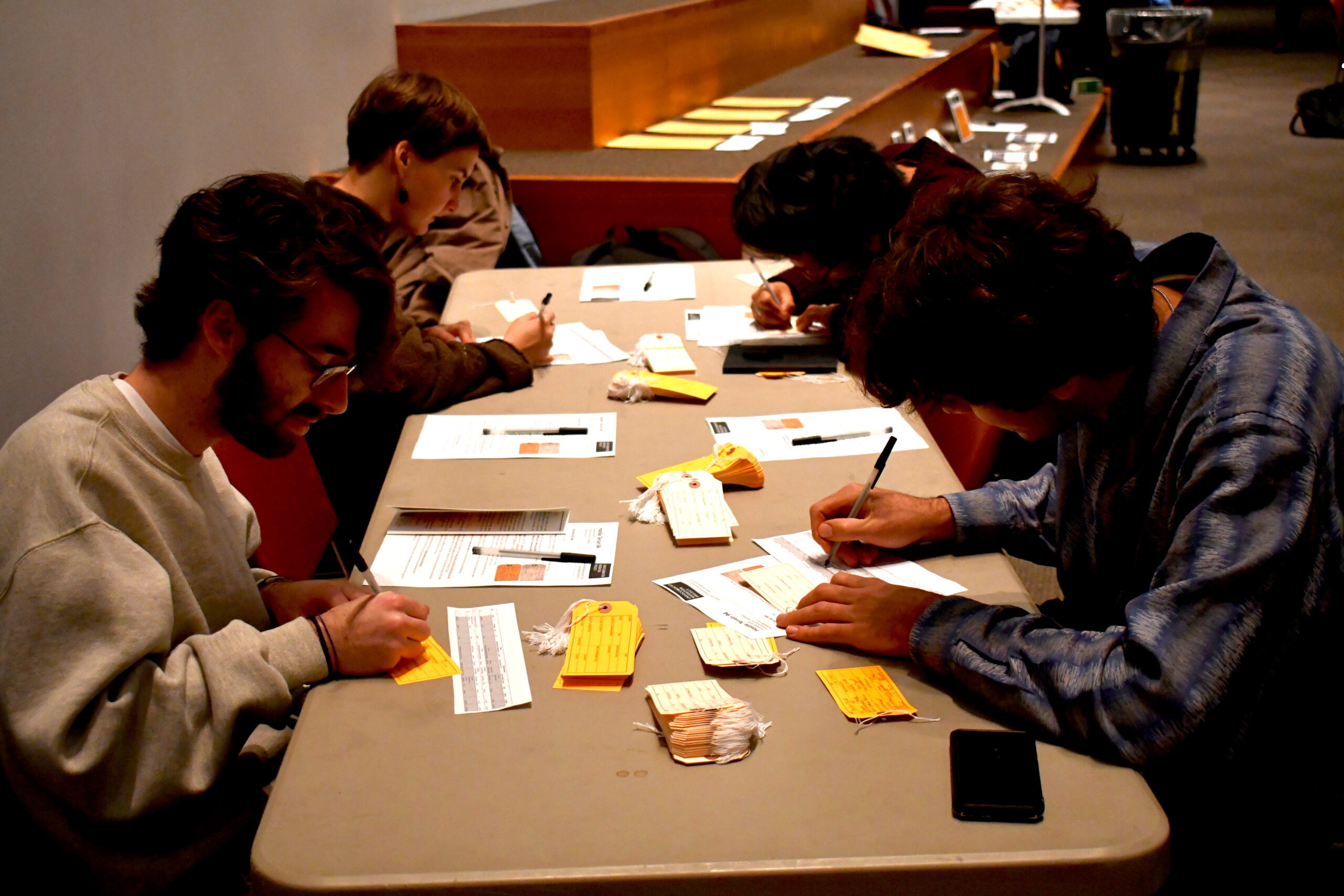 HT94 participants filling out tags in LUMA Lobby at the Fisher Center.

“You’ll never know how people will react to this,” Gabe explained that this was one of the more exciting parts of the project, “and you can’t tell people how to react.” Gabe recalled at one location that a participant asked if he could ask other participants to not speak so much during the exercise. “I can’t do that though, because good things can happen no matter what you talk about. It could imply certain things, it could be cathartic. The old women talking about what they had for breakfast while they do it could just be trying to cope with the gravity of what they are doing right now.” Gabe sees the process of filling out the tags as both a way to raise awareness about the content of the piece and as a community building exercise.

I filled out 20 tags myself. I asked for more after, but when I received another list of 5 bodies, only 1 of which was identified, I found it difficult to start again. The terms “UNIDENTIFIED” and “UNKNOWN” began to look foreign to me. With the statistics of their death being the only information available, I became frustrated that this was all that was known about a person who had a whole life before that moment. Gabe responded to my frustration with, “You’re right, the people these tags represent don’t care about this emotionless data (latitude/longitude where their bodies were found, date of recovery, etc.)… We (UMP) are not here to fix immigration policy, the politics are too complicated to do that in one way. We are advocating. Advocating for better foreign policy, so people don’t feel the need to make these unnecessary journeys.”